The Small Glories (CAN) 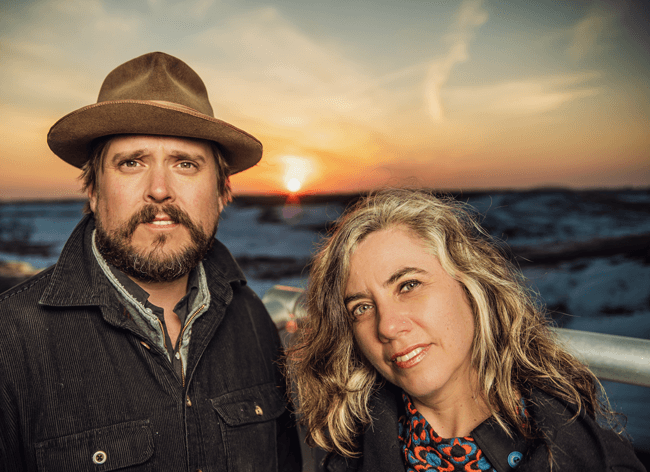 Roots powerhouse duo The Small Glories are Cara Luft & JD Edwards, a musical tour-de-force partnership planted on the Canadian Prairies.  Thrown together purely by accident for an anniversary show at Winnipeg’s venerable West End Cultural Centre, The Small Glories could almost make you believe in fate.

With a stage banter striking a unique balance between slapstick and sermon, these veteran singer-songwriters have a way of making time disappear, rooms shrink, and audiences feel as they are right there on the stage with the band — writing the songs, living the songs, performing the songs. It’s not uncommon for listeners to find themselves laughing, dancing, crying, or caught up in a good ol’ fashioned sing-along.  “We’re folk singers, we try to write stuff that people can relate to,” says Edwards, whose looming stage presence and penetrating eyes find him the yin to Luft’s petite, snort-laughing yang. The material of a Small Glories concert is welcoming in terms of subject, folk-pop melody and instrumentation — songs of love, loss, and environment, delivered with soaring, interwoven vocals on various combinations of stomping clawhammer banjo, guitar and harmonica. However, a Small Glories performance is really about what happens in-between the songs. “The feedback we get from a lot of audiences is that it’s not just about the music for them,” Luft says. “It’s the whole package.”

“Luft and Edwards sound right at home together, and they may soon join duos like Mandolin Orange and Shovels & Rope among the ranks of Americana prestige. [One of the] 10 Folk Artists You Need to Know in 2019.”
– PASTE MAGAZINE

“ … when two voices meant to merge find each other, their power somehow multiplies… The Small Glories generate so much energy together they could almost form a hurricane, though blizzard might be a more apt metaphor for this Canadian duo.”
– AMERICAN SONGWRITER

“Perhaps The Small Glories need to rename themselves, for the full-hearted lyrics, the swelling harmonies, and the gorgeous fabric of the songs on this album are certainly large and wash over us with a powerful beauty that pulls at our hearts.”
– NO DEPRESSION

“Their vocal harmonies are second to none, buoyant and brimming with personality, and they’re
equally impressive instrumentally… ★★★★”
– MOJO

“The Small Glories should be welcome listening to any fans of Gillians Welch and David Rawlings, Mandolin Orange and others of that ilk… The whole album is an almost perfect example of modern Americana. ★★★★”
– ROCK’N’REEL (R2) MAGAZINE

“Luft and Edwards mine a sound drawn directly from a distinct rootsy regimen. With their close knit harmonies and an archival folk-like feel, their music taps into tradition while maintaining its contemporary credence. Now, two albums on, they’ve become a force worth reckoning with, seasoned and spirited all at the same time.”
– BLUEGRASS TODAY