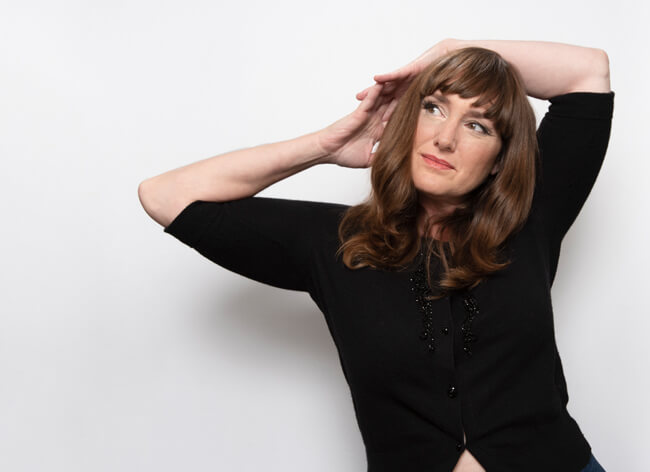 In 1995, taking my stage name from the famous Stephen Foster song seemed perfect. Oh Susanna was both a play on my own real name, Suzanne, as well as a way to hearken back to the great American folk songs that were a source of inspiration for my own music. Oh Susanna was a kind of shorthand to impress upon the listener’s mind, the time and place where I wanted them to travel – along the rusty old trainyards to the fields, mines and hills of mythical America. I promised them that, if they were willing, this journey was all possible by the power of my voice singing a lonesome song.

Taking the name Oh Susanna also made me feel that, suddenly, right before my feet, a red carpet magically unfurled, leading me to a stage lined by footlights and cloaked in a red velvet curtain. There, waiting for me, would be a lone microphone on a stand under a spotlight. All I had to do was act like Dorothy and follow the path to that wonderful place I longed to be, open my mouth and sing. You see, I had been so afraid to walk up onto that stage. I had buried my childhood dream of being a singer for over a decade, but now, I was finally inching my way along that imaginary red carpet.

Wearing this mask helped me show a face that sometimes felt more like me than who I was in everyday life. I could sing about other people’s experiences and yet express my own feelings through these songs. Although not always made explicit, I set these stories on the plains, in the mountains, in cities and wilds of the country of my birth: The United States of America. A place of great promise and dreams and, on the flipside, a place of hard-luck and desperation.

From 1995 – 2011, I wrote and recorded six albums that used melodies and imagery inspired by Americana. There was a twang and a heartache contained in my voice that I took from country, blues, old time and bluegrass music. But then something shifted. I began to listen less to American music and more to contemporary Canadian singer-songwriters, many of whom I knew. Tired of singing my own words and melodies, I recorded an album called Namedropper, a collection of songs written especially for me to sing by many of my talented Canadian compatriots. I admired how these writers wrote about their own lives and their homes, about things recognizable as Canadian.

Inspired, I embarked on writing a song cycle about myself as a young punk rocker coming of age in Vancouver. A Girl in Teen City, for me, was unique in that I was channeling my teenaged self and yet also looking back at it all from the place I am now. It was at this point that I started to feel the parts of myself integrating, my musical self and who I am when I am not onstage, these started to feel more one and the same. By telling my own stories I was showing who I really was. I was lifting the veil of Oh Susanna and revealing who I was as Suzie Ungerleider. Pretty soon Oh Susanna started to feel like a costume that no longer fit but that I had sewn myself into. Instead of being liberating, the name Oh Susanna started to feel like a constraint.

The song Oh Susanna was first published in 1848, when its author Stephen Foster was just 21. The United States of America was less than a hundred years old. The story of America is rife with turbulent contradiction: it is a land striving toward the ideal of freedom yet built on the backs of slaves. A country created by stealing land from the Indigenous peoples. So, in the land of the free, freedom is for some but not all. Justifying this subjugation of non-white people is an elaborate theory of Racism and White Supremacy. A product of its time and place, the threads of these wrongful beliefs are woven through the lines of the song Oh Susanna.

The song Oh Susanna is part of Minstrelsy, a tradition in which (usually) white actors perform as characters that are demeaning and dehumanizing to black people. Foster wrote the original lyrics in “plantation dialect” meaning in the manner of how Foster (a white person) thought a black person from the American South would speak. The racist nature of the song is most explicit, however, when a verse makes a joke of the death by electrocution of “five-hundred n—–“. This verse, of course, is rarely sung today and therefore not widely known. After the Civil War, Stephen Foster himself changed many of his “plantation dialect” songs into standard English.

Of course, when I decided to use song as my namesake, the words had long been changed and verses eliminated in order to “whitewash” its racism. Because of this, the song had no racist connotations for me. The song was just an American folksong that I learned in public school with sweet, longing, playful lyrics.

I don’t remember the exact time when I became aware of the original lyrics of the song Oh Susanna. I do remember that when I did I thought it was an ugly relic of the past, that it was what people used to think – like the changing of the lyrics, things had changed for the better, right? This past summer, after the killing of George Floyd and Breonna Taylor and people rightly took to the streets to express their outrage at this happening again and again, it really became so obvious that we have a long way to go, that racism is still strongly embedded in our minds and our institutions and that it is only privileged white folks like me who can be blind to it even though we benefit from it and perpetuate it through our acceptance and silence.

Suddenly those racist lyrics felt absolutely current. Right here and right now, the lyrics conjure and make present violence against black people. This is the power of language. By saying something, you make it happen in the listener’s mind. It didn’t matter to me that not very many people know that the original lyrics to the song Oh Susanna are racist. I felt that if I were to continue to use the name Oh Susanna I would be passively accepting and perpetuating its racism.

In 2017, after writing a whole album of songs as a love letter to my home town Vancouver, I started realize how homesick I was. As a youth I wanted to leave that city so badly. Because my parents were from California and New York I never really thought I belonged in Vancouver. It was just a place I happened to land along with my parents. I believed I was to do what they did, go elsewhere and discover myself. I moved to Montreal to go to college and it was there that I started to unearth my dreams of being a singer. Scared shitless, I stepped onstage for the first time to sing covers at a coffee house at Gertrude’s, the basement bar located in the McGill Student Union building. The small crowd went wild and I was ecstatic. I started to dream again.

After college, back in Vancouver, I sang a few more times in public and wrote a few songs. Then I made a little demo tape that caught the attention of the music industry. I was lured to Toronto and met musicians who loved the Carter Family and Hank Williams as much as I did. They understood this music I loved and made it a living thing by playing their own version of it. So in 1997, I decided to move to the big smoke where live roots music was oozing out of the doorways of The Horseshoe Tavern, Ted’s Wrecking Yard, The El Mocambo, C’est What, Holy Joe’s and The Rivoli (just to name a few). In that city, I felt seen as a fully-fledged singer-songwriter, I was a young upstart, but a serious one who went by the name Oh Susanna.

For the next twenty years, I made so many friends and connections from living a musical life. I gained a husband and a child all by being in the community of Canadian musicians. I was lucky to finally be what I had dreamed of as a kid, someone whose life centred around music and musical expression.

Then all of a sudden it was music, specifically A Girl in Teen City, that made me look closely at who I was before that musical life. Music led me to re-visit and reflect upon the place that made me who I was. Vancouver. Writing those songs allowed me feel how much that salt water was in my blood and how those mountains that watch over you no matter where you go were my protectors. I was a prodigal daughter, who had lived and learned and grown through her travels and trials, and I had to come home.

I have now been back in Vancouver for a year and a half. I am still following my path but this time it is one where I am truly integrating my musical being with who I am, finally seeing that music is inside of me and not in some alter ego. Believe me, I have loved being Oh Susanna, she is exciting, dark, funny, charming but I am now recognizing that was actually me all along, that it was Suzie Ungerleider who was all those magical things, I just didn’t let myself see it that way. So here I am, leaving behind the trappings of a persona that gave me the courage to climb up onstage and reveal what is in my heart. Now that I have grown, I am ready to shed that exoskeleton. It once protected me but I need to take it off so I can be all of who I am.